3 secrets to turning ideas into action

One of the most satisfying things a leader or a team can do is come up with ideas. Brainstorming can be enormously productive when you’re grappling with a problem. Whether you’re spit-balling ideas, whiteboarding, or free-associating to come up with a solution, the act of producing those ideas feels like real work.

And it is. But only if those ideas translate into actions. And that’s where organizations sometimes fall down. In the exhilaration of generating ideas, they fail to take the next step—execution.

Why does this happen?

It may happen because ideas, in a room full of enthusiastic team members, feel like things. And they’re perfect things because they exist in a perfect state of not-yet-reality. They’re like the snow before you tromp over it…the pond before you chuck a rock into it…the department before you shake it up with your change management initiative.

So how do we make the connection between ideas and actions?

It comes down to three key practices. 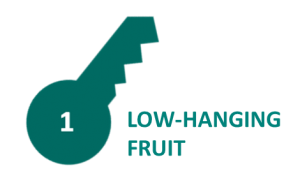 You’ve generated excitement by coming up with ideas. To keep that enthusiasm level high, you need some quick wins. What are the actions you can take that will yield the most significant impact right out of the gate?

Let’s say you have a $50,000 budget to make three of your corporate offices more ergonomically friendly. What items will have the most impact right away? Is it a high-tech massage chair for the breakroom? Better-designed keyboards for all? A thousand stress balls? Identify what will make the most marked difference and represent the most progress toward your goal of improving the office ergonomics. This is what we call the low-hanging fruit.

The rationale behind going after quick wins is that it keeps the project team engaged so your ideas don’t die on the vine. Little, incremental successes demonstrate the validity of the project. They’re partial proof of concept, and they keep everyone’s morale up. 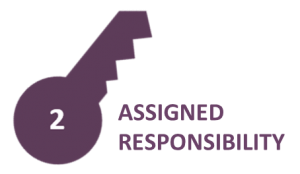 Another reason projects stall out at the idea stage is that team members simply don’t know what to do next. Even if they know what the team needs to do next, individuals don’t know what their roles are. That’s why it’s important to assign specific tasks and responsibilities. Because if you decide those three corporate offices of yours need a thousand stress balls, somebody’s going to have to source them, price them, and get them delivered.

But don’t just leave it to somebody! We’ve all heard how that goes…

Every task should have a name or names attached to it. Not only does this create accountability for tasks; it gives team members a sense of accomplishment when they deliver. 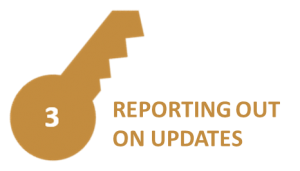 Yet another reason why projects fizzle is that team members have no idea where they are on the timeline or if progress has been made. Without knowing what others are doing, they may not know when to perform their particular roles. With that uncertainty comes anxiety. They may wonder if they’re supposed to be doing something but be worried about asking—because they should know already, or so they think.

Not necessarily! If reporting isn’t part of a project, team members end up in the dark. They know they’re supposed to be doing something, but heck if they know when and how.

That’s why it’s a good idea to embed progress updates into your project meeting agendas and have team members speak about their specific activities. They get to tell people what they’re doing, get feedback, do course corrections, and understand how their activities fit in with everyone else’s and the overall goal. And the whole collective gets a sense of how much is getting done—which fires up the enthusiasm they had about the idea in the first place.

If your team doesn’t meet regularly, there are other ways to report progress. Project management software or shared spreadsheets can enable regular updates. Even a weekly email may do the trick.

If you get these three practices right, you create a thread of accountability that ties your original idea to its outcome and loops your whole team in along the way. They stay engaged and everybody knows what’s going on.

What do you do to make sure your ideas get traction? Are there any steps you’d add to this list?